Part Two: Botox and beyond: A man’s perspective on cosmetic procedures

In Part One of Botox and beyond: A man’s perspective on cosmetic procedures, Our patient, Jay, opened up about his motivation to “youth-en-ize” his appearance. In Part Two, he will tell us about his experience with laser skin resurfacing and botox.

I must admit, after I saw how Voluma injections changed my facial lines and deep wrinkles I was hooked.
I scheduled the next step in my treatment plan, Fraxel laser.

Dr. Atkin and I had discussed, and decided that Fraxel 600 micron for laser skin resurfacing would be the best choice for me. With years of outdoor activities and growing up in a sunny climate my skin had taken a beating. I had been having regular liquid nitrogen treatment to freeze pre-skin cancers with years. And I had a basal cell carcinoma removed from my shoulder 5 years earlier. Dr. Atkin explained that the Fraxel 600 micron would give me an impressive cosmetic result, and in addition, it would reduce my skin cancer risk by taking away pre-cancerous changes on my face and neck.

The day of my treatment I arrived at the office, nervous, but glad I was taking the plunge and doing it. It helped that the receptionist greeted me with a big smile and a cup of coffee. My pictures were taken (for my medical record) and a potent topical numbing cream was applied. I am a bit of a wimp sometimes, so I opted to be medicated with oral sedative. The nurse that was taking care of me and prepping me for the procedure gave me a blanket and a pillow and her favorite Netflix recommendations. I spent a hour watching “The Fall” while I waited for the numbing agent and medication to take effect.

Dr. Atkin explained what the C02 laser would do and answered my questions before starting the laser treatment . I was pretty relaxed from the medication, so the treatment was not hard to take. It did feel a little hot in a couple of places along my jaw and temples and I had some stinging after it was over. The nurse applied cold packs and a saline and gauze soak to my skin for a few minutes to stop the stinging. That really helped.

I hadn’t told anyone, except my brother and his wife that I was doing this. Because of the medication, I needed someone to drive me home after. My brother showed up and made me FaceTime his wife so she could see how I looked. She told me I looked great. They were both really surprised that I looked like myself, just a little sunburned and a little “puffy”. She also said my brother had been talking about having Fraxel resurfacing ever since I told them about my appointment. It turns out his sun-damage and wrinkles were bothering him too.
Taking care of my face and neck the first couple days after treatment wasn’t too hard. Tara, the nurse that took care of me in-office, called and checked on me and answered questions as I thought of them. The most important thing to remember was keeping my skin from drying out, so lots of moisturizing cream and hydrocortisone cream to take the redness and that puffiness away.

At my follow-up appointment, three days later, I decided to get some botox in my upper face. I asked Nurse Tara what her favorite treatment was and she told me Botox to prevent lines. I was all over that. Within a week I was completely healed from my laser, the botox had kicked in and I looked 35 again. Well, almost….. I still had that double-chin.

Stay tuned for Part 3: Dealing with the double chin.

For more information about laser skin treatments for men
to schedule a consultation. 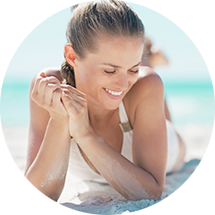